JAR / something about the greatest jeweler of our time 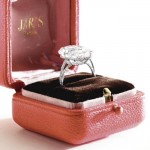 If someone loves jewelry, loves JAR.
He is the greatest jewelry creator of our time / in Diane von Furstenberg words ‘the Fabergé of our time‘ /.

I collect here some articles I found about JAR.

JAR is a secretive, eccentric artist.
This jeweler certainly knows how to make his products sought-after.
Born Joel Arthur Rosenthal, he affects to be known by a single name: JAR (no periods). His shop in Paris’ Place Vendôme has no display window, no regular hours.
It does not advertise and opens its doors to only a select few, including Elizabeth Taylor, Elle Macpherson, Barbara Walters, Ann Getty, Mary Pinault and Jo Carole Lauder (and reportedly Marie-Josée Kravis, Marella Agnelli and Princess Firyal of Jordan).
The craftsmen in Switzerland and France turning out his creations produce only 70 to 80 pieces a year, each of them one of a kind and many designed with a particular buyer in mind.

He reserves the right to refuse to sell an item if he doesn’t think it would look good on the intended wearer.
Over the 30 years he has been making jewelry, JAR has accumulated a tight circle of friends, dealers and collectors who speak of him in worshipful tones and don’t answer questions without his approval.
Rosenthal is the only child of a Bronx postal worker and a biology teacher. He graduated from Harvard in 1966, then moved to Paris, where he met his boyfriend and business associate, Pierre Jeannet, a Swiss psychiatrist. He dabbled first in scriptwriting, then needlepoint, opening a tiny shop where he experimented with unusually colored yarn.
Its clientele included designers from Hermès and Valentino.

Rosenthal one day was asked if he could design a mount for a gemstone.
That sent his career in a new direction. After a brief stint as a salesman at Bulgari in New York he returned to Paris in 1977 and started designing pieces that relied at first on inexpensive stones like coral, moonstone and minute colored diamonds. Dealers would often give him an extra gem or two on consignment.
He focused on pavé, a technique for setting small stones so close together that they form a veritable pavement of jewels. His settings are so finely wrought as to be virtually invisible, and gradations of color progress from subtle to vivid. Unlike other jewelers, he uses a dark metal alloy for the settings to highlight the gems’ color.

Only twice has Rosenthal displayed his jewels to the public, most recently in London in 2002. Four hundred pieces lent by 145 JAR faithful were crowded into small vitrines. He insisted that the lights be dimmed and that flashlights be given to his guests, who groped and gaped their way from case to case.

One underlying theme runs through his creations: exceptional craftsmanship. Passion and perfectionism are terms freely used in a world that revolves around exaggerated sensation, but these two words seem to perfectly sum up the extraordinary creativity and drive of this unique individual.

Joel Arthur Rosenthal founded JAR in 1977 with his Swiss business partner, Pierre Jeannet. Remarkable both for their imaginative settings and the diversity of materials, his jewels are often created around exceptional gemstones.
Rosenthal will spend years searching for the perfect stones, matching unique pairs of gems and often using uncommon semi-precious stones such as coral, tourmalines, topaz and vari-colored sapphires, as well as Golconda diamonds, old Colombian emeralds and fine Burmese rubies.
In contrast to the production of most jewelers today, each JAR jewel is a handmade, one-of a kind creation. Because he employs traditional artisan techniques that are extremely time-consuming, only 60 to 70 items are produced each year, with each one destined to pass into the realm of the most esteemed private collections.

Although his work has enjoyed a cult-like following among the fashion cognoscenti for decades, JAR remained something of a best-kept secret until the landmark sale of the Ellen Barkin collection at Christie’s, which drew so many exceptional examples of his work into the spotlight.

JAR’s skill in blending colors of gemstones is legendary.

Despite such publicity, JAR purposefully maintains a very small and private enterprise with one shop, one designer and a small staff. His client list remains exclusive and intensely loyal, and the company’s salon on Place Vendome in Paris bears no sign, has no jewels on display, and may be visited only by appointment.

Why is Joel Rosenthal’s work so desirable?

François Curiel: Because the jewelry is not advertised, because it is not easy to buy, because it is so rare. He only produces 60 or 70 pieces a year. He doesn’t work very hard. His shop is open from 10 am to 12:30, then he goes to lunch, then reopens from 2 to 6. The shop is closed altogether from July 10 to September 15. People get frustrated by the fact that they have no access because he’s not there like any other jeweler.  If someone important, a major client, wants to see you Sunday at 10 am, every other jeweler runs to meet them. Not JAR. If you want to make an appointment with him, you do it between 10 and 12:30 or 2 to 5. He doesn’t work Saturday or Sunday.
I heard a story that somebody from Texas was in his shop once and said, “I like them all. How much for the lot?” That is not JAR. You won’t get a discount because you buy four pieces. He said, “I can’t sell to you.” The person left unhappy. This is not a place where you can negotiate the price. That is the price. Some people get a bit annoyed by that.

If I was in Paris and tried to make an appointment, would I get in?

FC: You would probably not. He gets a lot of mail, as an American who lives in Paris, letters from students, from people who would not necessarily be buyers. He might answer if he doesn’t see it as a journalist trying to go through the backdoor. He’s very amenable. He talks to everybody, he’s not a snob. He’s not a high flier.

So, what is it that makes JAR’s  jewelry so desirable—the design, the rarity, the inaccessibility?

FC: All of the above.

JAR has long been known for his elusiveness.

When JAR opened his little shop on the Place Vendôme in Paris more than three decades ago, he had no jewelry training. He graduated from Harvard in 1965 with a degree in art history and philosophy and moved to Paris the following year. He has never done any bench work and isn’t much of a draftsman. Former director of jewelry for Christie’s and now head of Christie’s Asia, François Curiel organized the Barkin auction and has known JAR for decades. “He draws like a child,” Curiel admits.

Yet from the beginning, JAR attracted high-profile customers with his unusual sculpted, pavé creations, often using the blackened silver-gold alloy he developed. He never produces more than about 70 pieces a year and half are commissions inspired more by his own whims than that of his A-list clients.

Judging from observations by his acquaintances, the man has a waiting list a mile long – and an even longer list of people pining to get on the waiting list. Which may be why his jewelry usually sells for well above estimates when it appears at auction; that’s the only time JAR jewelry is immediately available to anyone who can pay the price.

How did this untrained American designer become bigger news than Cartier and Van Cleef & Arpels? It has something to do with how difficult his jewelry is to get, of course, but also its craftsmanship—JAR is known to send pieces back to the workshop many times—and its quality of being individualistic yet recognizable at the same time.

About half the jewelry JAR produces are special orders. The other half are his own one-of-a-kind designs. “When one wants a piece of jewelry from someone other than one of the major houses, something no one else has or that was designed especially for you, where do you go?” Curiel said before auctioning off the Barkin jewels. “Whenever I ask this question the answer is JAR, JAR and JAR.”

“His clients know they have to wait,” says Saul Goldberg, a diamond dealer whose family, William Goldberg & Co., has been selling stones to JAR for two decades. Goldberg and his father have been trying to predict JAR’s taste in stones for years. “Give him a pear-shape diamond and he’ll say, ‘Cut off the point at the bottom, then show it to me.’ He looks for something exotic. He likes flat stones, not conventional cuts, soft cuts like a cushion or an oval.” 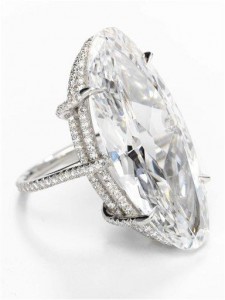 He has even been known to set conventionally-cut diamonds upside down, as he did with Barkin’s wedding ring: four rows of diamonds set with culets pointing up. I tried this ring on before the 2006 sale and it looked lethal, like bejeweled brass knuckles. I couldn’t help wondering if JAR had a sense of foreshadowing when he designed it.

Despite his exclusive clientele, JAR is not a snob, Curiel insists: “He is very amenable…not a high flier.” Goldberg agrees: “He follows his own vision. His clients can’t rush him. He’s not dictated by their whims but by his own. He’s a good model because he shows that if someone wants something bad enough, they’ll wait.”